Hi guys I just got back from my month long trip to New York and thought it’ll be great to write a few posts on the city. So let’s start with 5 things I love and hate about New York. It wasn’t my first time in New York, but it has been my longest trip yet.

The time  you spend in a location and the activities you do will influence how you see the place and after living in New York for a month like a local. I have some strong opinions about this place.

1. The different boroughs and neighbourhoods

New York City is made up of the 5 boroughs. There’s Manhattan, which is the heart of the city, Brooklyn, Queens, The Bronx and Staten Island.

I went to all of them except The Bronx. I really enjoyed exploring each one because each borough had a distinct style. The width of the roads to the style of the houses, they change from borough to borough and it shows when you pay attention.

I really liked this difference because it’s like a trip out of town without going out of town!

And then of course the different neighbourhoods within Manhattan are always a nice treat to explore. You have good ol’ China Town, Korea Town, Little Italy, Little Odessa. You have the Tribeca area, SoHo, Greenwich Village and the list goes on.

You walk a few blocks and the sights and sounds instantly change. The language spoken on the street changes, the shop signs change, the atmosphere and overall energy changes. I love it! 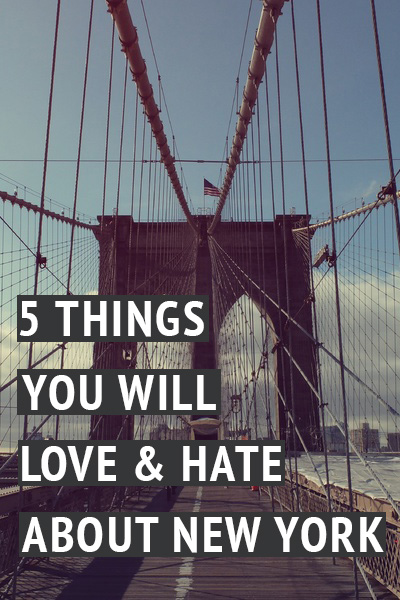 2. The Studios and theatres

New York is home to a number of live studios and theatres. You’ll see a lot of them concentrated around Time Square area.

A lot of these studios have live audiences and the theatres always have the classics or news shows playing. There’s something about the area, with how dense it is and how convenient the location is, that makes everything seem so exciting.

Tip: most shows give out free tickets on the day if you’re willing to line up early.

I’ve been to my fair share of big cities around the world and have never come across a city like New York where the arts were located so centrally. It’s refreshing. It also makes it easier for the general public to take an interest in something they might not think of doing very often.

3. All the free stuff happening around the city

There’s so much free stuff in New York city! I could easily spend nothing but transport in this city that is the world’s symbol for capitalism.

New York gets this reputation for being expensive, and it can be. But from my honest opinion, it’s actually really cheap if you know where to look. Or more accurately, it can be really cheap if you’re flexible with your time and we’re not thinking about rent.

Free or cheap food is everywhere. Free activities happen everyday. Free experiences that are novel and fun is just around the corner of every street.

I really like museums in general, so the massive ones in New York are places I can easily spend a whole day at. A lot of the museums are privately funded with displays of private collections so the places are well maintained and their mostly  a “pay what you like” entry fee.

My top picks are:

Where should I begin? If America is the “melting pot” of cultures, than New York is the epicentre of the pot. Find every type of food in this one place. It might not be authentic, it might even taste better than the real thing. Or, it might just be a brand new New York local invention.

You can effectively try all types of cuisines and diets in the world within this one city. Try Ethiopian, Japanese, Puerto Rican, Vegan, Kosher, Jamaican. The list goes on.

Hong Kong is known for it’s food, but Hong Kong doesn’t actually have such a strong array of different types of food at such quantity. We’re not talking about ONE Jamaican restaurant in the whole city, or TWO Hungarian restaurants. We’re talking about people having an abundance of choice for each type.

Flying is never “great” unless you’re flying first class, I’m sure we can all agree on that. So when the airport experience at the start or at the end of your travel is horrible, well, it just makes you question why anyone wants to get on a plane voluntarily.

The airports in New York do just that for me. I’ve been to both JFK and Newark, both mediocre experiences at best (if I’m being polite)

To be fair, I’ve been to worse airports but those airports matched the local economic situation. That means I shrug it off like it’s to be expected. But New York? NYC? The big apple? A world class metropolis city, home to the wolves of wall street?

No. I couldn’t just shrug it off like it was expected. Instead it was a shock to the system.

Staff was rude and unhelpful, signage was unclear, bags were slow to come out and TSA was…well let’s just say I’ve never been frisked so throughly in my life before.

The lines for immigration were impressive. Truly impressive, and I’m not using the word impressive in the positive way.

New York’s subway system covers a lot of ground, which is great. The bad thing is how old their system is and how little the city has updated it over the years.

Delays, maintenance work and lines being shut down is a normal occurrence.

Signage within the subway stations and on the street level isn’t very clear. They like to use north, east, south west on their signs, which isn’t much help if you don’t know which direction things are.

The air circulation is another big one. I haven’t been to New York in the summer, but I can only imagine how bad it gets because I was already suffering in September. The good news is the new cars are air-conditioned, which means you will only need to bare with the suffocating lack of fresh air and oven like conditions while on the platforms.

And the biggest pet peeve I had was how unfriendly the system was towards people with disabilities. I notice when places are not wheelchair friendly ever since my sister became a mum, and taking a stroller out is a thing. The lack of escalators, elevators and ramps was mind boggling to me.

This one is similar to the above. I can only imagine hw bad it gets in summer, because it smelt so bad on collection night. Bags of trash just get piled up on the curb. And it’s every curb in entire areas.

The piles can get as tall as me and the smell is just unbearable.

I don’t know how this came to be or why it’s been deemed ok enough to not solve this, but I hate it. It sometimes smells like dog sh*t, that’s how bad it gets.

Ok, so this isn’t a New York thing. Tipping is a very North American thing, but extremely foreign in other cultures. The most you get is 10% service charge that’s automatically added to the bill. If any.

This isn’t VAT or some other type of tax, charge or fee. This is a supposedly “voluntary” amount under your own digression to reflect the quality of service and product you got. Or so that’s what I thought tipping meant before I went to New York.

It’s mandatory in New York, or almost. You don’t have to, but you’ll be asked to when the waiter finds out. The minimum is 15% and some places even suggest 28%! I understand the reason for this strong tipping culture is due to the low wages waiters gets. I’m not refusing to give it, but I don’t appreciate the sneaky ways they try to squeeze you for more when they print the bill.

Most bills will have suggested amounts calculated to make your job as a customer easier. The nice honest places will have them listed, at the bottom. The sneaky dishonest ones will have some percentage above 15% added to your bill automatically in addition to the list of suggested calculated amounts.

Let me explain this further.

And that’s just the example I’m giving you. My personal experience is them adding 20%!

I have. big fear of roaches and although I live in Hong Kong, I keep my place really clean. The city also doesn’t have that many unless you go to back alley ways.

New York on the other hand …*shudders just thinking about it* I saw my fair share of them because the weather was pretty warm.

In the subway and on the street. They’re not small either. They’re big, meaty roaches that are fearless and unfazed by humans being near by.