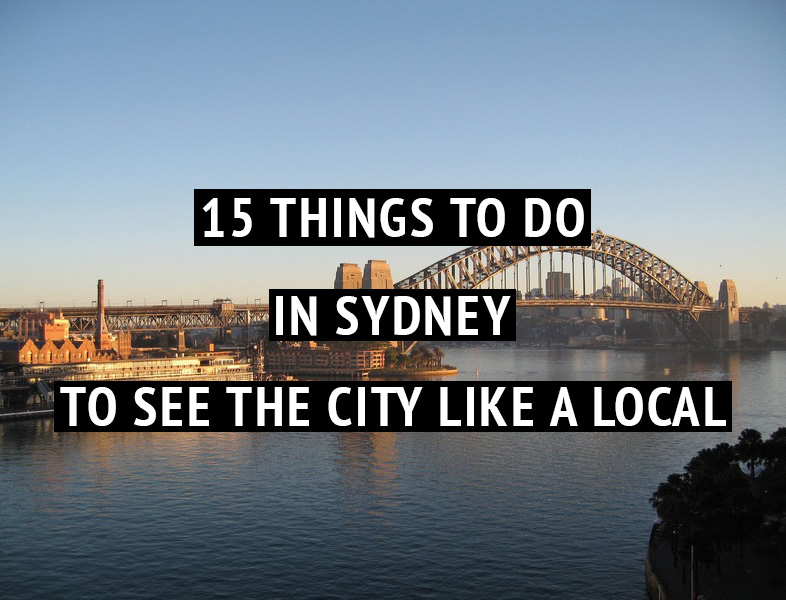 Brunch culture is huge in Australia. I can’t really put it into words how huge, is huge. I don’t think there’s many cities in the world that can compete with Sydney’s love for brunch on the weekend.

Indulge yourself with the many options available from all vegan menus on one side of the spectrum to hearty, guilt free meat extravaganza on the other side.

Here’s a few suggestions for you:

Watch a Movie at an Open-air Cinema

Open air cinemas aren’t very common in most places, but Australia being so rich in space; there are multiple open air cinemas in the city. Each with their own unique qualities.

From full sized beds, to having the Sydney Harbour as your backdrop, open air cinemas in Sydney is something you want to check out. What better way to experience a city like a local than to do a classic activity with a twist.

Many of them only operate for a season so you’re best to plan your trip before getting your hopes up.

Dance Like No One is Watching – No Lights No Lycra

No Lights No Lycra is a chance for people to let loose and be completely uninhibited on the dance floor. The idea is you can dance without thinking because no one is watching. Well in fact, they can’t watch because the whole place is dark!

It’s become a world wide movement where you can probably find a NLNL in your own city. That being said, Australia is the birthplace of NLNL, which I think makes it that much more fun.

There’s a few locations in Sydney, but I would say Newtown would be my choice.

Every spot opens on a different day so be to check it out on the website to be sure.

Other than brunch culture, coffee culture is also a big deal in Sydney. From the early waves of Greek, Italian and Lebanese immigrants, Sydney has been well versed in the art of drinking coffee.

You won’t find Starbucks here, or well you will, but it won’t be on every street corner. (Starbucks famously failed in Australia and had to retreat the market a few years back)

Order your coffee, make a little small talk with your barista and grab seat outside. Then just simply enjoy your coffee as you watch people walk by.

Note: I don’t drink coffee as some of you guys already know. So I unfortunately don’t have any recommendations for you.

I know. It sounds weird and I was skeptical before I tried it, but if you like cake then you’re bound to like this one.

My advice is to grab a square early in the day before it’s sold out. (They sell out everyday) You can find the original Black Star Pastry in Newtown right across the train station and if you’re lucky you can grab a seat while enjoying your cake. Though my personal advice is to eat it somewhere else if you don’t want a long line of hungry people staring at you. 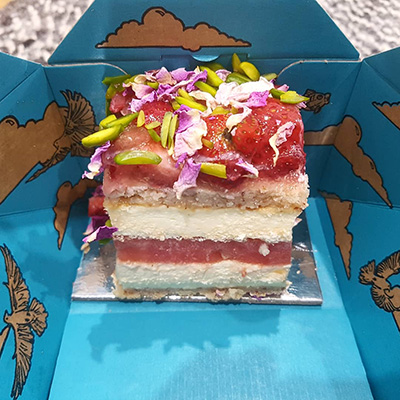 Open 7 days a week from 7 am to 5pm (but like I said, get there early to not be dissapointed)

Have an Afternoon Drink with a View

I couldn’t make a list of non-touristy things to do in Sydney without putting something related with a cold pint.

Heading to a pub is too predictable and drinking on a night out isn’t anything special, but a relaxing beer in the afternoon is definitely special in Australia.

Pick a spot along the Harbour and grab a beer. Enjoy your refreshing drink as you take in the great weather, scenery and relax in the middle of the day. There’s no better feeling.

If you know me, then you know my favourite place in Sydney is Newtown. I fell in love with the neighbourhood from the first time I visited. So much so that I lived close-by at St. Peter’s the next time I visited Sydney.

There’s a lot to do in Newtown, but the main place would be King’s St. It’s lined with small shops, restaurants and cafes. The entire neighbourhood is very relaxing, but never boring.

You won’t find high street names here and you won’t find the same thing again and again. Instead you’ll get genuine variety, which I love.

Admittedly, it’s a little hipster and I think it’s been a tad bit gentrified. HOWEVER, none of it’s charm has been lost because you can still feel the community spirit of the locals living there.

You don’t feel like you’re another face for the person behind the till.

Test Your Brain with an Escape Room

I love escape rooms, and Sydney has many dotted around. If the weather isn’t behaving itself for you or you just want to do something other than the touristy stuff, then an escape room is perfect.

There’s a lot to choose from in Sydney and most only have one or two rooms to choose from. There’s something for everyone, from the down right scary to simply brain puzzle paradise.

Have a Picnic at Wendy’s Secret Garden

Wendy’s Secret Garden is this little hidden gem away from the people’s gaze. The story of this garden is what makes it really interesting for me. The plot of land right in front of Wendy’s house was an outlet to distract herself from the passing of her husband. The area was left abandoned for years and she changed it into this beautiful area that leads to Lavender Bay.

The best part of this story is, she never asked for permission from the government if she could just landscape the place, and over the years no one ever told her to stop. What you get is this public space that is free for everyone to enjoy but feels oh so private.

When you reach Lavender Bay from the garden, you’ll be greeted by this amazing view of the Sydney harbour and bridge. It’s the best photo opportunity!

Start Laughing or get Confused, with Comedy Nights

Australians love to laugh, and there’s a lot of comedy clubs to help the city laugh. Head over to a comedy club and enjoy the humour or be confused by it. But don’t worry if you don’t get the sense of humour, you’ll still enjoy the friendly atmosphere of everyone else laughing!

Carrigeworks Farmer’s market is held every Saturday. The place isn’t very big but there’s a lot of gems to be eaten here. The farmer’s market showcases locally grown produce in NSW and eateries that put quality at the top of the priority list. (You’ll know what I mean when you eat there)

The stalls and vendors do change now and again, but the standards never change.

You can also make your way to the massive Carriageworks studios adjacent to the farmer’s market.

How to get there:

Open from 8am to 1pm on Saturdays

Antique shopping might not be the first thing you do when you want to bring your inner child out, but as Mitchell Roach Antique and Design Centre you’re bound to get your inner child buzzing with curiosity. Antique shops are rather common in Sydney, but most are small or they specialise in specific wares like chairs, tables or lighting only.

At MRA&DC (I’m not writing the whole thing again) you can find everything. It’s this massive 2,300 sq ft warehouse full of antique stalls. If you’re like me, who loves going through things and being surrounding by objects, no two being the same, then you’re going to want a whole afternoon here.

There’s no better way to let your inner child out then by sparking your curiosity from novel objects.

How to get there:

Have Thai Food for Dinner

But unlike most countries with a heavy immigrant community that brings their food over, Australians manage to keep it authentic. Thai food in Australia, tastes like Thai food.

It ranges from a cheeky Pad Thai take away all the way to fine dining.

Eat like a local and have Thai for dinner at least once while you’re in Sydney. There’s a lot to choose from at every price range in every neighbourhood. 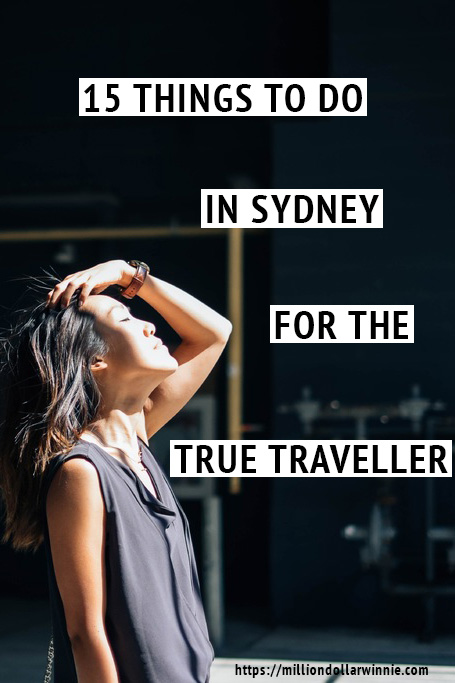 Wake up Early and Head to Central Station

There’s nothing more satisfying then being in the hustle and bustle of a city but not need to deal with any of the bull crap of living in the city.

Am I making sense? You know the feeling of waking up, watching someone else get ready for work and then you get to go back to sleep. Well yeah this point is a bit like that.

Australians are early risers, they start their days early and they start it with a lot of energy. You’re not going to find crowds of lifeless individuals on the train, instead it’s when the city is most alive. (in my personal opinion) The energy is almost tangible, with heels tap, tap, tapping away in hurried steps, coffee shops full to the brim of regular morning goers, awkward half jogs/walks to catch the train doors just before they shut.

It’s just nice to be amongst it all, especially in Sydney. Sydney’s morning rush hour at Central station isn’t overwhelming like in New York, or as fast paced as Hong Kong, or as aggressive as London. It’s just fun.

When to get there:

Chow Down on Chinese Food in Chatswood

Ok, I just had to put something for the Australian Chinese community. Chatswood is home to so much Asian food, good Asian food. Chatswood is actually a CBD area within the northern suburbs of Sydney, but in recent years it’s also become a haven for Chinese food.

Don’t want to eat a meat pie? Chatswood will have a yummy alternative for you.

Did you enjoy this post? If you did, please take a moment to use the social media buttons on the left to share this with friends, family, colleagues, anyone with access to the internet… Thanks!

Get your Australian Visa sorted with iVisa.com if your country isn’t an ETA approved country. They’ll sort it out for you easily.